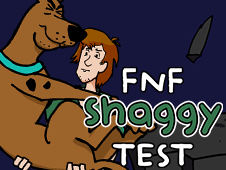 In the latest round of the FNF test series, titled FNF Shaggy Test, your objective will be to collaborate with Shaggy and Scooby-Do to compose songs that are original and unheard of. You can see that the arrows, which correspond to the left and up buttons, are located on the left side of the game's bottom, while the arrows that correspond to the right and down buttons are located on the right side of the game's bottom. At the same time, Shaggy's head will appear on the left side of the game screen. Clicking on it will allow you to switch between different game modes.

Try out all of Shaggy's customizations

You will have the opportunity to try out all of the different modifications that the Cartoon Network character has in the game. These include the first state, in which everything is normal; the second state, in which the character appears to be more anxious; and finally, the third state, in which Shaggy is falling freely. Because each state has its own set of distinctive tunes, we strongly encourage you to experiment with as many of them as possible in order to get a feel for the game's newest playable character.

Use arrow keys to play this game

If you miss too many times, you will lose the game