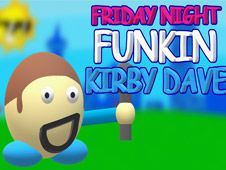 The radiation caused Kirby Dave to appear instead of the ordinary Dave in an intensive battle with Boyfriend, a war you must win by performing to a great song named 'Kirbstomped". Kirby Dave appeared because of the radiation in an intense battle with Boyfriend. Keep an eye out for when the arrow symbols float and match on Boyfriend's head, then press the appropriate arrow keys on the screen at the same time. You must keep going until the song is finished to win. If you make the same mistake numerous times in a succession, you will lose the game and have to start over from the beginning.

Use the arrow keys to play