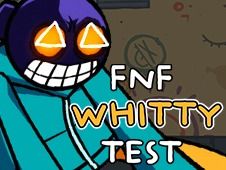 A new test module, FNF Whitty Test, has been developed for all players on our website and is now available for testing. You will be able to compose sounds inspired by the game FNF vs Whitty using this emulator, which is a really cool feature. This guy is one of the most well-known characters in FNF, and he has a striking physical look. As soon as you press the button on the left that is depicted as dynamite, you will have the option to switch the character to a new version, which is the equivalent Whitty Remix.