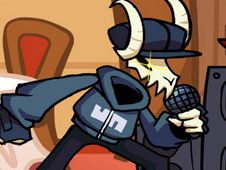 This time, we'd like to introduce you to a new game called FNF vs TABI Ex-Boyfriend, in which the combat takes place in a rhythmic fashion between present boyfriend FNF and ex-boyfriend Tabi. The rapper appears to be dressed in nice tracksuits, shoes, and a cap, but his head is a skeleton with big horns, like a goat, because he's GOAT, one of the best rappers in the world, who was abducted by GF and her father, and he's been imprisoned since. And now he's back seeking vengeance, even going so far as to detonate a bomb in a restaurant in an attempt to apprehend GF. To assist Boyfriend in defeating him in a rhythmic combat and save his loved one, you must work together.

Use the arrow keys to play