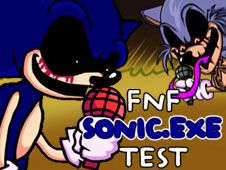 Sonic. Our team is thrilled that Exe is the most recent FNF test character game you can play for free on our website, especially since we created FNF Sonic.EXE Test for you and it is ready to be enjoyed right now. Exe is the creepy and horror version of Sonic the Hedgehog, an internet meme that has now become a really popular FNF antagonist for Boyfriend to defeat, one that has been featured in many of these rhythm games.

In this game, there are four various versions of the spooky Sonic that you can play with. To switch between them, use the icon button on the left side of the screen and select the one you like most.

Then, you can freestyle Sonic's song and dance routine by using the four arrow keys to generate noises and dance. Each key corresponds to a distinct note and dancing move.

Using the buttons on the left, you may also witness four distinct animations and cutscenes. It's really that easy, so get ready to have fun with FNF as you get access to it every day on our website!

Use your arrow keys to play