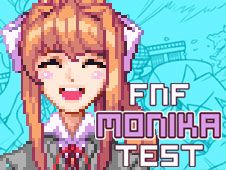 The primary character in Friday Night Funkin' vs Monika, in which you can test this character in 5 various poses with his companion Senpai, is Monika (DDLC), the antagonist from the well-known horror game Doki Doki Literature Club.

If you're testing this game on a mobile device, such as a phone or tablet, you'll need to use the arrow keys on the keyboard or touch the arrows on the display. You'll see that by hitting the test arrows in a specific order, you can create tunes. By hitting the button on the left side of the screen (which represents the character's head), you have the option to move Monika's position, which is an important feature of the game. Monika will alter her personality and the sounds will change each time you touch this button.

Use arrow keys to play this game

If you miss too many times, you will lose the game